How Competent
are You?

Quality speaking, that is. . . 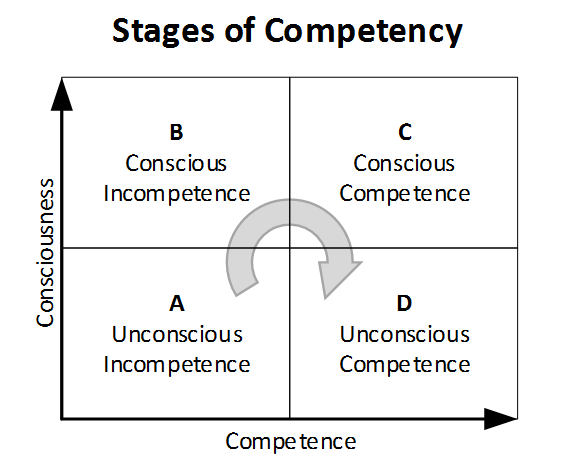 The “Stages of Competency” model is a tool developed by Noel Burch in the 1970s. The model suggests awareness emerges in these four stages:

A. Individuals are initially unaware of how little they know, being unconscious of their incompetence.

C. As they begin working toward and showing improvement, they become consciously competent.

D. After much learning, experience, and success, they master the skill and reach unconscious competence...a Zen-like state.

Most organizations are in need of a simple quality program. In the Stages of Competency learning model, they are in quadrant A or B.

These companies are often unaware that patterns exist to transform their chaotic work environment into a stable work environment where they can operate with much less variation, and therefore, must less risk.

Chaotic environments allow problems to grow undetected until they reach crisis mode and then require a hero to solve. Frequent heroic acts, as well as a recurring need for hot-fixes, are tell-tale signs of a chaotic environment.

Chaos can exist even among highly skilled people. Like the skilled Air Force test pilot, there is so much complexity in today’s IT environments, that it is impossible for even a well-trained professional to repeatedly get everything right.

In contrast to a typical, rushed chaotic IT environment, picture your people looking at a performance console, reporting that there are no emergencies to fix. Picture them looking at performance indicator charts that show all service level agreements have been met and customer satisfaction trends are up.

Picture them discussing remaining variances in their standard work results and working daily as a team to improve performance.

Picture an orderly, clean environment where the team is learning and improving together. What you’re envisioning is an out-of-the-box quality program called the Stable Framework™.

Finally, a Role for the Development Manager

Agile teams are self-organized, so what is the Dev manager's role?

What is the Hidden Factory Anyway?

How much time does your team spend responding to chaos?

Continuous Improvement is a Myth

Continuously re-discovering the same improvements over time is not real improvement.

Can Agile be Improved?

It's Not Technical Debt

Six ways to make everything better

But checklists will slow us down . . .

Quality speaking, that is

When a hired gun won't do.

So what is it, anyway?

Getting a new perspective.

An overview of how the Stable Framework™ components work together creating value within your organization.

A Book describing the Stable Framework™ is now available.